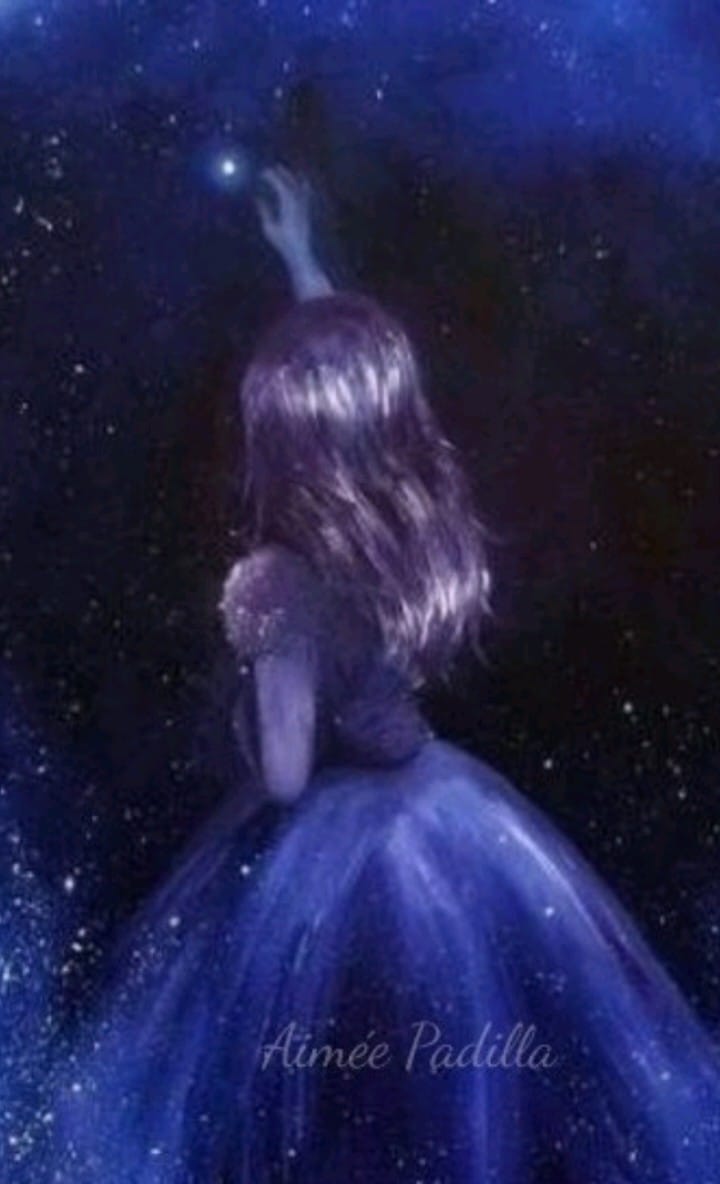 One cold autumn night, where only the murmur of silence could be heard, there was a dark angel holding a purple star, which was a product of his imagination.

One day, he heard the crackling of many diamonds among the trees and the star came to him without any warning, just came and settled delicately in his hand; its ethereal light emitted rays of glorious intensity, was warm to the touch and he felt as if it wrapped him in a protective embrace.

She was his treasure, where the dark angel went, the star accompanied him through the most inhospitable and lonely valleys ever imagined. Her star inspired him and made him write down everything that was in his heart. With her star she was able to travel to parallel universes, she was able to fly beyond what the angel could even think… she just spread her wings and launched herself so that from above she could feel the night breeze touching her face.

It is indescribable the taste of freedom, to leave behind all the mental chains that tied him to what once was his earthly plane, was something that not even the most valuable gem could buy, so the angel used the gift that his star provided, to share that happiness with others.

With his star, the angel was at peace and happy. Eternity was very pleasant next to his purple star because he no longer felt alone, he could tell her everything that was in his heart and the star responded in the same way.

One day, a beautiful angel of light arrived as the couple exchanged their amazing talks full of magic… a language that only those willing to listen could understand.- Good morning beautiful dark angel What is that you are holding in your hand?

Good morning angel of light… How dare someone as beautiful and successful as you, even look at this sad creature of the night?

Don’t talk nonsense, we each have a space within the Universe… but tell me, I am curious, what are you holding in your hand?

-It is my purple star.

-Ah yes? I see that it emits purple flashes. What exactly does it do?

The dark angel took the beautiful star from his hands, like a heavenly gem, and placed it in the hands of the angel of light.

-Go,” said the dark angel, “sing for my friend, please”

Then, the star began to play the most beautiful melodies ever heard. The angel of light could not believe all the sensations he could perceive by the simple touch of the star. Through his veins ran strong discharges of happiness, love, peace, sweetness, tenderness.

– My God! What is this? -exclaimed the astonished angel of light, not yet releasing the star, “how did it get into your hands?

-I don’t know – said the dark angel -she came to me one day and has never left me. She told me that I created her, that she came out of me and that she materialized in the form of a purple star; we are both one.

-Well, please give it back to me – said the dark angel and extended his powerful hand to take the star, but in the blink of an eye, the angel of light had disappeared along with the star.

Thousands of needles of pain and dense darkness took hold of the dark angel, and his heart turned to stone and began to bleed profusely.

-Oh my God, how could I have been so naive? Why did I think an angel of light could be good?

But within him, he heard the precious and beloved voice that he knew so well:

-Fear not dear dark angel, you and I are one no one can steal from me, he thinks he stole from me, but I belong to you so do not suffer, soon I will be by your side. Come to our valley, here I am waiting for you.

Then the dark angel, in all his despair, flew through all the valleys of thought until he finally reached where his beloved star was waiting for him… the scene was horrifying but captivating at the same time. The angel of light was petrified and still held in his hands the purple star that emitted slow, joyous flashes of happiness. The transformation of the angel of light was amazing: His body had become transparent glass, but his interior was jet-black. He was kneeling and on his hands rested the star. The dark angel took it delicately from his hands and embraced it; both joined in a strong embrace that seen in the distance its tone was the color of fire.

-No one can take what does not belong to him, you created me, I am yours, no one can possess me, so the angel of light simply transformed himself into what he really is: In a transparent statue, so that everyone can contemplate what is really inside him and that he cannot deceive anyone else, making us believe that we are not worth anything, that we are wrong and that they can take what they please at their whim.

-He always has been, he just doesn’t know it.

And so, the dark angel and his purple star set out again on their journey to places only they knew, while the angel of light watched them in their crystal prison.